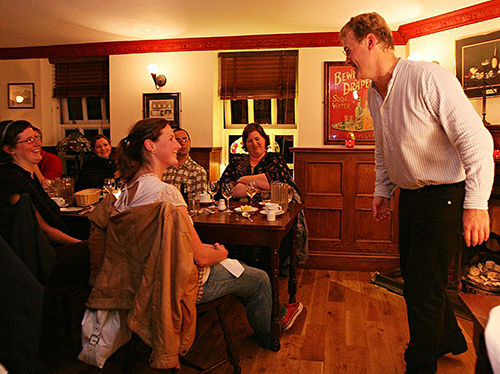 Peeling back the layers of Ireland's mysteries.

Frequently I find that it takes me many trips to a destination before I can peel back its layers enough to know what it truly is. Ireland is like that; to me she's mysterious.

Very recently, I toured south Ireland with a very merry, congenial group, 50 fans of a suburban Washington, DC, Irish pub, MaMahon's. Niall Leogue, an Irishman who runs tours of Ireland through his company Caddie Tours, arranged our fanciful and diverse vacation and Emmet and Kelsey McMahon, pub owners, hosted our Ireland-lovers group along with him.

I had figured that if I was going to see Ireland "well," I'll see it through the eyes of a native son. I truly got my money's worth.

From Pub Crawls to Ireland's Legend and Lore

In the evenings we pub-crawled in Galway, Dingle, Kinsale and Dublin. During the daylight hours, we rode by coach, with a driver who is also a certified tour guide, along narrow roads and highways embraced by village life or coastlines.

We visited iconic tourist attractions, such as the Cliffs of Moher, and took one side-trips to a statue and cave dedicated to St. Brigid (one of Ireland's three patron saints) and another to Cong for "The Quiet Man" reenactment. On the Dingle Peninsula, on the route to "Ryan's Daughter" beach, we stopped at Mary O'Sullivan's property to walk among the 6th century monastic stone hive huts. Mary collected two Euros from each of us as we walked her land and even let us use the bathroom in her home.

Passing pastures, meadows and castle remains, our driver talked of the legends that influenced Irish culture. What held me spellbound for the week, though, was exploring the legends and lore of Ireland's fairy underworld. Ask an Irish man or woman if they believe in fairies and they likely tell you "no" but we don't mess with them, either."

"Fairy trees" are single hawthorn trees believed to be a portal to the fairy world and you'll see them about Ireland. In fact, you cannot drive an Irish road without passing one.

Irishmen told me that it's better to curve a highway around a fairy tree than to cut it down. The reason John de Lorean's auto company went bankrupt, I was assured, was because a fairy tree was cut down on the new plant's property.

On the way to the Kilbeggan Distillery, a living museum nowadays and our first stop from Dublin's airport, our driver Mick Nolan — who knew everything, but everything, about Irish history and lore and wove chit-chat, yarns and jokes into his narrative — began pointing out lone hawthorn trees.

Many stood dramatically in meadows and as we passed pastures of multi-colored sheep encircled by stonewalls, lone hawthorns appeared one after another. Occasionally, we saw circular clusters of them and although I didn't yet understand their significance, I knew that Mick Nolan, our driver-guide, was going to pull it all together for us.

While I was drawn to the storied landscapes and vistas, the convivial people, the quaint and quirky pubs (funeral homes that double as pubs?), what I relished most was learning about Ireland's fairy culture.

It permeates landscapes and beliefs and is a cultural mainstay. As we passed hawthorns images of a fairy king, adorned in velvet robes, soon began dancing in my head. When we came upon circular clusters of fairy trees - a "fairy fort," said Mick — I wanted to peek behind it into the fairy kingdom.

Ireland's fairies are not crafted of the same yarn as Disney's. In fact, they look somewhat like us except for the leprechauns. Leprechauns are shoemakers by heritage and are the least nice of the fairy kingdom. Known to be mischievous, quite possibly even evil-spirited, in past centuries they were believed to kidnap young boys.

The first time I saw a photo of an Irish family, which was taken in the late 1800s or early 1900s, I saw four daughters. The "daughters," however, all had boys' names. And in a photo of a schoolhouse there were all girls. Many of these "girls," though, were boys in dresses, and, that goes back to leprechaun lore.

Because leprechauns are all male, they cannot replicate. So, according to lore, leprechauns steal little boys to ensure the survival of their species. To fool the leprechauns, mothers dressed their boys as girls, although, as I noticed in the photos, they kept boys' haircuts.

Traditional Musicians and a Professional Storyteller

One evening in Dublin, we had dinner and more at Ireland's oldest pub, the 800-year-old Brazen Head, a short walk from the Temple Bar district. As I did at every pub we visit, I had an Irish coffee.

In an upstairs room reserved for us, musicians played traditional Irish music and a professional storyteller from Irish Folk Tours, Johnny Daly, shared Irish lore and history with us. That meant more on fairies and leprechauns, as well as events in Ireland's tumultuous history, from British domination to famine. Like the rest of us in the room, I was enthralled by Johnny's stories. Listening to him reinforced for us how Ireland's history, lore and culture are so intertwined they are inseparable.

When I returned home from Ireland, there was an email from Johnny. He had remembered my interest in the fairy underworld and sent me a list of Irish fairy reference books and articles. As I looked down the list I realized there was more than enough to keep the magic going until my next visit to Ireland.